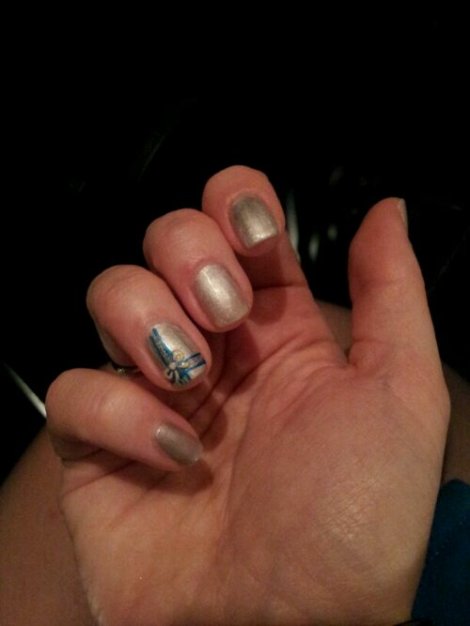 Once upon a time, I got my nails done before the Christmas party. I don’t do that very often as, with incessant typing and general disregard, the polish never lasts until the party. I just can’t justify shelling out the money for a soon-to-be damaged set of nails.

But, this year, I paid the extra few dollars and got the shellac polish. As the name implies, this stuff has a little more substance to it. It gets baked on. Several times. I mean, I was already in the salon paying the money. I might as well make it worth my while and spend  the time getting something that will last. So, a few layers later, with the vague threat of the colour lasting longer – perhaps up to a few weeks even! – I was sold.

I now think the few weeks was simply in reference to how long it would look normal. Because the polish is still all there. In perfect shape. It’s now just half way up my nail. Oh, and it doesn’t come off with the common acetone that’s been living under my bathroom sink for far too long…no… it was professionally put on and it needs to be professionally removed. And I’m all sorts of okay with that. It makes perfect sense. I just am too lazy to go in and get it removed.

So. As my sister cringes and plans in advance to roll over in her grave, I have done what makes the next most sense to me: I paint over it. You know, with the darkest polish I have. I suck at it. But the dark polish, uneven layers and ragged edges go rather well with a claw-like grasp. Were it only Halowee’en.

Sadly, though good quality, this is regular polish and prone to dings and chips. All the more-so if the top coat isn’t applied with full coverage. Yes…let’s blame the topcoat…and the bad lighting in the photo above. That just ruins everything. Now on the second round of cover-up, you’ll have to believe me that this is a better job than the first.

It’s a good thing I have several colours of saturated polishes to keep me amused over the next few weeks. Maybe by the end of it, I”ll be able to put on a proper, even coat. Maybe even one that lasts more than 24 hours before chipping.