And then there was that time we got up at 4:15am and took the Skytrain downtown to catch the Amtrak train to head south. 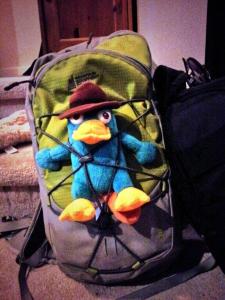 Though the sun was barely tinting the sky when we left home [really, it could have just been the street lights reflecting off the clouds, were it not for the pink tones], we are now in full-fledged morning on our way through the ‘burbs. We’re passing the city’s light industry and a the early morning commuters, tapping the horn on occasion just for fun, I guess. This is already a view we don’t get to see much ad I”m only picking up landmarks because of our preference for driving back routes more often than highways. Back routes,it seems, parallel train tracks.

The Magpie got up – albeit in a bit of a stupor – and got ready. Her excitement of last night had barely worn off in the few hours of sleep she managed to get. There were no last minute pleas to bring her biggest stuffy; no concerns about leaving the cat at the kennel. There weren’t even any complaints about leaving in the dark and walking down to the bus loop. She all in. This vacation thing is good.

Have I mentioned there’s wi-fi on board?

We’ll be rolling along for the next six hours or so past Fraser River’s tug boats and cargo, across the border, through the mountains and onto Portland. Scenery, a camera and internets. And a travelling platypus.

What could possibly go wrong?

One response to “all aboard”